Under the terms of the grant, a total of $500,000 has been awarded to the Fairfax County Police Department over two years to fund, among other things, a new Human Trafficking Unit. A full-time detective and a full-time crime analyst are now dedicated to conducting human trafficking investigations in Fairfax County. They will also coordinate the overall investigative efforts of federal, state, and local law enforcement members of the Human Trafficking Task Force in Northern Virginia.  An additional $500,000 over two years was awarded to the Polaris Project to provide services to victims of human trafficking issues in collaboration with the task force.

The title of the grant is the FY 2013 Enhanced Collaborative Model to Combat Human Trafficking.  The Northern Virginia Human Trafficking Task Force was one of seven jurisdictions to receive funding.  The six other jurisdictions that will receive grant awards under this program are Arlington, Texas; Riverside County, California; St. Louis, Missouri; Brooklyn, New York; Buffalo, New York; and Seattle, Washington.

Founded in 2004, the Northern Virginia Human Trafficking Task Force is a collaboration of federal, state, and local law enforcement agencies – along with nongovernmental organizations – dedicated to combating human trafficking and related crimes. 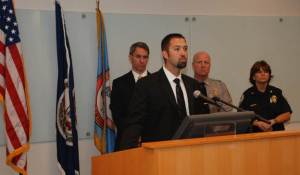 From FY 2011 to the present, the U.S. Attorney’s Office for the Eastern District of Virginia has successfully prosecuted 24 federal cases against 57 defendants engaged in human trafficking and closely related conduct throughout northern Virginia. These convictions resulted in sentences ranging from 10 years to life imprisonment. These cases involved at least 38 juvenile victims of sex trafficking, over 350 adult victims of prostitution and sexual exploitation, and 2 adult victims of forced labor.

With the infusion of these additional funds, the Northern Virginia Human Trafficking Task Force will continue to take an aggressive and innovative approach to investigating and prosecuting human trafficking cases. In addition, the grant provides a comprehensive array of restorative services designed to meet specific victims’ individual needs.

Learn more about human trafficking and federal initiatives and where and how to find help for victims.