Santa, Motors, and Gifts for Kids, OH MY!

As Christmas approaches, children everywhere will be watching the skies for Santa Claus.  Here in Fairfax County some very special children won’t have to wait until Christmas Eve.  Since 1988, Santa and his elves have been rumbling down the streets of Fairfax County on motorcycles picking up and delivering toys to children in local hospitals. Once again this year, Santa will temporarily trade in his sleigh and reindeer for a Harley-Davidson motorcycle and police escort. The Fairfax County Police Motorcycle Squad, in cooperation with the Fairfax County Sheriff’s Office, Virginia State Police, Fairfax City Police, Falls Church Sheriff’s Office, the Town of Vienna Police and the Herndon Police will escort Santa on his annual “Ride for Children.”

During the second week of December, Santa and his elves will collect donated toys from local police stations, other government facilities, and eight Fairfax County Public Schools. The following day, Santa and his helpers will deliver toys to children at INOVA Children’s Hospital Child – Life Services Center and the Georgetown Hospital Lombardi Comprehensive Cancer Center. Some of the toys that are not handed out on the day of Santa’s visit are left with the Child Life programs at each hospital. Those toys are used throughout the year to provide the children something to keep their mind off of their treatments. Toys will also go to various local charities including Life with Cancer and the Herndon-Reston F.I.S.H. (Friendly Instant Sympathetic Help).

We look forward to bringing Santa to each hospital and are grateful for the opportunity to bring smiles to the children’s faces for at least a moment.

Anyone wishing to make a donation should bring a new, unwrapped toy, game, book, or other gift to any Fairfax County Police Station, Fairfax County Print Shop at the Government Center, and the lobbies of the Pennino and Herrity Office Buildings. All donations should be made before 9 a.m. Monday, December 12. 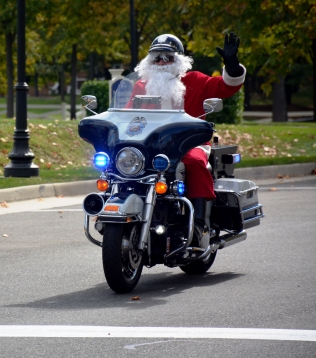 An itinerary for Santa and his helpers is available upon request from the Public Affairs Bureau at 703-246-2253.