BURLGARY: 6200 block of Frosty Winter Court, 1/16/17, around 6:45 p.m. A resident notified police that upon returning home, she saw her back door kicked. Officers cleared the house and nothing appeared to be taken.

14100 block of Lee Highway, keys from purse and property from vehicle

ATTEMPTED ROBBERY:  Janna Lee Ave / Tamarind Street, 01/16/17, around 6:45 p.m. The victim was walking and was approached by two men. The suspects displayed a knife and demanded money. The suspects were spooked by a witness and fled on foot. There were no injuries. The suspects were described as black, 16 to 20 years old, 5 feet 3 inches to 5 feet 7 inches tall, and around 140 to 160 pounds. They were wearing black jackets or hooded sweatshirts and jeans.

COMMERICAL ROBBERY / WEAPON DISCHARGE: 8200 block of Richmond Highway (Goodwill), 01/13/17, around 9:04 p.m. A man entered the store and displayed a pistol to an employee. The suspect fired his weapon inside the store. No injuries were reported. The suspect ran away in an unknown direction. The suspect was described as black, with a dark complexion, approximately 5 feet 10 inches tall, and around 170 to 180 pounds. He was wearing a black, hooded sweatshirt, black jeans, black boots, and a black ski mask.

ASSAULT ON LAW ENFORCEMENT/ARREST: 2500 block of Windbreak Drive, 1/15/17, around 12:15 a.m. Officers responded for a noise violation at this location when one of the occupants came at them aggressively. The suspect refused commands to step back and grabbed one of the officers by his body-armor vest. Kofi Sarpong, 21, of Woodbridge was arrested, taken to the Adult Detention Center, and charged with assault on law enforcement. 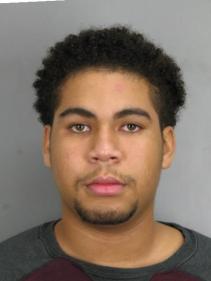 2600 block of Redcoat Drive, wallet and phone from vehicle

3700 block of Roxbury Lane, Xbox and laptop from vehicle

ROBBERY: 3000 block of Nutley Street. 01/16/17, 3:20 a.m. The victim, a 49-year-old man, was sitting inside the Safeway store, when he was approached by a man who asked for his cell phone. When the victim refused, the suspect punched him several times in the face, took the victim’s property and ran away. The victim was taken to a local hospital with minor injuries. Officers found a suspect a short distance away. He was positively identified and the investigation is ongoing. Charges are pending.

BURGLARY: 7400 block of Chummley Court, 1/14/17, around 11:50 p.m. Police responded for a report of someone entering a home and taking coins and keys. No further suspect information.

ARMED ROBBERY: Glen Carlyn Dr/Vista Dr. 1/15/17, 3:40 a.m. The victim was walking alone when a man jumped out from behind a tree, tripped the victim, displayed a knife and took an undisclosed amount of cash. The victim did not require medical attention. The suspect ran away toward Vista Drive. He was described as Hispanic, mid 20s, around 5 feet 7 inches tall and about 180 pounds. He was clean-shaven and had a gold tooth. He was wearing a dark, hooded sweatshirt.

ASSAULT ON LAW ENFORCEMENT/ARREST: 6200 block of Little River Turnpike, 1/14/17, around 8:06 p.m. Alexandria City police met our officer at this location to exchange a person in custody, who was wanted in our jurisdiction. Once our officer attempted to take custody of the prisoner, he began to assault the officer. After a brief struggle, officers were able to gain compliance. Mateo Amaya, 22, of Woodbridge, was taken to the Adult Detention Center, where his outstanding warrants were served, and he was charged with two counts of assault on law enforcement and obstruction of justice.

ASSAULT WITH A WEAPON: 6000 block of Vista Drive, 1/16/17 around 9:50 p.m. Officers responded to a report of a fight and the sound of gunshots. When officers arrived, they found a 21-year-old man on the ground with apparent trauma to the upper body. He was taken to the hospital with non-life-threatening injuries. An investigation so far has determined a group of males were in a verbal altercation with the victim. Someone in the group pulled a gun and shot the victim. The suspects fled. Detectives responded and are investigating.

3500 block of South Jefferson Street, cash and merchandise from business

Double Shooting, Hostage/Barricade Situation Ends in Use of Deadly Force

MALICIOUS WOUNDING: 11400 South Lakes Drive @ South Lakes High School. 1/15/17, 2:20 p.m. Two men in their early 20s, were among several other men playing soccer. An argument broke out during the game and punches were thrown. At some point, one man took out what was believed to be a box-cutter and allegedly cut two players on the opposing team. Responding officers rendered first aid until rescue arrived. Both were taken to a local hospital; one with life-threatening injuries. Both victims are now expected to survive. The suspect was described as white, in his 20s, around 5 feet 4 inches tall and about 170 pounds. He was wearing a black shirt, black pants and a blue jacket.

1200 block of Shaker Drive, gun and TV from vehicle

BURGLARY: 5600 block of Glenwood Mews Court, 1/16/17, around 7 p.m. A resident notified police that someone had broken the basement window and rummaged through the house, but nothing appeared to be missing. There is no suspect information.

BURGLARY: 7300 block of Glenwood Mews Court, 1/14/17, around 11:17 p.m. Officers responded to a house alarm and saw a basement window broken and a screen door removed from the rear of the house. They cleared the house, which appeared to be vacant. While on the scene, they saw a broken basement window on the house next door. Contact was made with the residents, who had just come home and realized items were missing. There is no suspect information.

TRESPASSING/ARREST: 6000 block of Stoddard Court, 1/14/17, around 4:15 p.m. Officers responded to this location for a report of someone trespassing. An apartment complex manager was showing a vacant apartment when a man jumped from the window. Officers gave chase and located the suspect hiding in an adjacent building. They took 21-year-old Leoul Yosef, of Alexandria, into custody and took him to the Adult Detention Center where he was charged with trespassing.

COMMERCIAL BURGLARY: 6000 block of Electronic Drive, 1/15/17, around 8 a.m. An employee notified police that someone had come into the business and taken tools. No suspect information.

6100 block of Wellington Commons Drive, clothes and shoes from vehicle

ROBBERY: 6000 block of Burke Center Parkway. Navy Federal Credit Union. 01/15/15, 9:02 p.m. The victim, a 54-year-old woman, withdrew an undisclosed amount of cash from the ATM. A man then grabbed her purse and began to run away, but the victim was still holding the cash in her hands. The suspect returned, threw the purse to the ground, implied that he had a weapon and demanded the cash. The victim threw the cash at the suspect and she was not injured. The suspect ran to a black sedan, possibly a Nissan, and drove away down Burke Center Parkway.

COMMERCIAL BURGLARY: 8900 block of Village Shops Drive, 1/14/17, around 2:02 a.m. Officers responded to a commercial burglary alarm at several businesses. They saw doors smashed open and notified management. Two cash registers and money was taken. The incident is being actively investigated.

5300 block of Portsmouth Road, purse and wallet from vehicle

10200 block of Roberts Common Lane, camera and items from vehicle

12700 block of Lee Highway, clothes and cash from motel room

Data not available due to technical difficulties.

Stay in touch with us through Social Media

Fairfax County Police Department Helicopter Division
This report is published every weekday, except county holidays. The information in each report covers significant criminal incidents generally from the day before; reports published on Monday cover the preceding Friday, Saturday, and Sunday. Some incidents may appear a day or two after the occurrence.