Assault on Officer Caught on Video 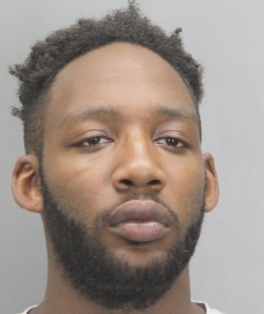 A 23-year-old man from Southeast, Washington, D.C., is facing several charges after assaulting an officer. Shortly after 3 yesterday afternoon, an officer patrolling the 8200 block of Russell Road in the Alexandria area of Fairfax County came across a man who smelled distinctly of marijuana which established reasonable suspicion that a crime was afoot. The officer asked Dadrian Jegede to stop, but he walked away. When the officer tried to legally detain him, Mr. Jegede immediately began physically resisting and pushed the officer away. The assaultive actions were captured on a security camera. Surveillance footage shows our officer attempting to get Mr. Jegede’s hands behind his back to lawfully detain him but he continued to resist, despite commands to stop. Our officer is seen telling Mr. Jegede to put his hands behind his back while the officer maintained control of the suspect’s wrist to prevent him from further assaulting the officer. During the struggle, our officer, who was alone and saw several people close in on him, called a “Signal 1,” over the radio which is a call for immediate assistance.  This signal code is utilized on the rare occasion when an officer is in trouble or is in great fear for his or her safety. An officer nearby quickly arrived on the scene to help. In an effort to gain compliance of a combative Mr. Jegede, the officer used appropriate force to overcome the resistance.  The two officers eventually gained control of Mr. Jegede and took him into custody to conduct a lawful arrest under the code of Virginia. No injuries were reported.

Chief Roessler viewed the video and is grateful that all involved are safe. He stated, “Law enforcement is a rewarding profession but it can be very dangerous at times.  Officers often put themselves in harm’s way to protect our community.  When we encounter someone who resists a lawful arrest and attacks us, we are concerned for the sanctity of all human life.  As a matter of transparency we provide this video to demonstrate the dangers of our profession.  My officers were professional at all times to overcome a violent criminal and I stand behind their actions.”

Mr. Jegede was charged with assault on a law enforcement officer and possession with intent to distribute marijuana. An outstanding warrant for failure to appear in court from Prince William County was also served. He is being held without bond.

As with all use of force incidents, an internal investigation is underway.

Mr. Jegede is expected to appear in court on Monday.

To view the security camera footage, please click on this link -> https://youtu.be/LOF_iby5J_A