WEAPONS VIOLATION: 6500 Quander Road (West Potomac High School), 1/10/20, 9:09 p.m. Officers were speaking with a group of men at a basketball game when a magazine to a handgun fell to the ground from one of the men. Officers arrested Jordan Cochran, 18, of Alexandria. He was charged with possession of a firearm on a school property, carrying a concealed weapon without a permit and removing/altering a serial number of a gun.

ROBBERY: 8700 block of Richmond Highway, 1/11/20, 6:55 p.m. The victim made online arrangements to purchase a phone. The victim met two men in a parking lot who threatened him with a knife and stole his money. The suspects were described as black men in their mid-20s.

TRAFFIC PURSUIT: Richmond Highway/North Kings Highway, 1/12/20, 5:07 p.m. An officer saw a stolen 2010 Toyota Corolla being driven on Richmond Highway.  He attempted to stop the car when the driver sped off resulting in a pursuit. Officers were able to stop the vehicle nearby and arrest the juvenile driver. Charges are pending.

3800 block of Mariposa Place, detergent and cash from vehicle

STOLEN VEHICLE RECOVERY: 7500 block of Parkwood Court, 1/12/20, 12:25 a.m. Community members saw a group of men pulling on car door handles. Officers found three people near a stolen 2012 Toyota Camry. The group tried to run away but were arrested by officers.  Jonathan Santos Ayala, 18, of Falls Church, was arrested on an outstanding warrant for failure to appear on a misdemeanor charge. Additional charges and charges for the two juveniles are pending further investigation. 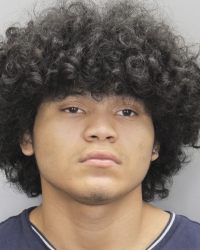 3900 block of Annandale Road, purse and cell phone from vehicle

7500 block of Reservation Drive, purse and package from vehicle

9000 block of Silverbrook Road, gift and debit cards from location

DESTRUCTION OF PROPERTY/ASSAULT ON A LAW ENFORCEMENT OFFICER: 12100 block of Monument Drive, 1/11/20, 2:54 a.m. ​Community members reported a woman damaging cars in the neighborhood. Officers found Taylor Glomski, 21, of Fairfax, who assaulted officers as she was being arrested. Glomski was charged with destruction of property, assault on a law enforcement officer and resisting arrest.

PEEPING: 11200 block of Bellmont Drive, 1/10/20, 1:45 a.m. Someone saw a man peeping into a window. The suspect left the area in a car, possibly a gold minivan. The suspect is described as a younger man, skinny, with dark complexion, possibly Hispanic, with short curly hair.